The Leaning Tower of Pisa
Mural at JOHN’S

Veal Bismark
aka Veal al Holstein
My old buddy, Chef Rene who I’ve known for almost 40 years made us Veal Bismark, which has not been on the menu for years, but he made it especially for our group. Everyone loved it. No one other then myself had ever eaten it before, and the wonderful flavors of the breaded fried veal cutlet, topped with a fried egg, and Anchovy Caper Sauce was amazing.
Veal a la Holstein was invented in the late 19th Century by the chef at the Berlin restaurant Borschardt, to please the palate of one Count Friedrich von Holstein. At John’s and at some other restaurants the dish is called Veal Bismark. 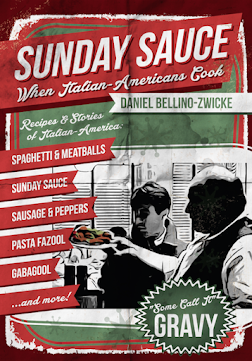 Near the Entrance of JOHN’S
Waiters side-station for Linnens and Plates
Note the Old Tile Floor
.
READ About LOST ITALIAN NEW YORK
At GREENWICH VILLAGE ITALIAN .com
The WORLDS TASTIEST DISH EVER !!!
READ About IT !
ANOTHER FAVORITE OLD SCHOOL ITALIAN
RED SAUCE JOINT 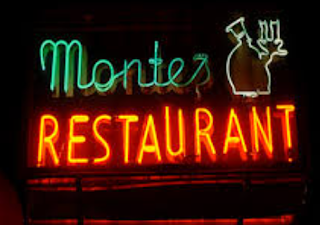 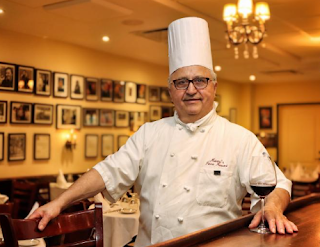 CHEF PIETRO MOSCONI
MONTE’S TRATTORIA
Monte’s is a classic Old School New York “Red Sauce Joint” Italian Restaurant in Greenwich Village.
They’ve got all the tasty Italian dishes you’d expect, like : Baked Calms Oreganata, Antipasti Misti,
Spaghetti & Meatballs, Manicotti, Canneloni, Lasagna, and the perfect Chicken Parm, served with Spaghetti and Chef Pietro’s tasty “Red Sauce”
Monte’s Trattoria has been around since 1918. That’s right, 104 Years Old and still going strong. Monte’s is run my a real true Italian, Chef Pietro Mosconi from Emilia Romagna, Italy. Chef is a generous welcoming man who welcomes his customers with open arms, quite literally. The man is a Rock Star who has a legion of loyal fans (1ps of Thousands) that he has cultivated with his family, being in business for almost 50 years.
The ambiance is wonderful at Monte’s, combined with tasty Italian Favorites (food0, great music, and fine service from Monte’s Old School Italian waters staff. it’s quite a combo.
And let’s not thingk it’s only Red Sauce. Chef Pietro who hails from Emilia Romagna makes all the favorite dish of the region, like ” Tortelloni en Brodo, Gnocchi with Butter & Sage, Veal Milanese,
Paglia Fieno (Straw & Hay Pasta) Tortelloni Monte’s, which is Chef Pietro;s famous homemade Tortelloni in cream sauce with fresh grated Parmigiano Reggiano baked on top. These dishes and more, keep Monte’s many loyal regulars coming back over and over again. Just like them, “We Love it” !!!
NEW YORK CITY ITALIAN 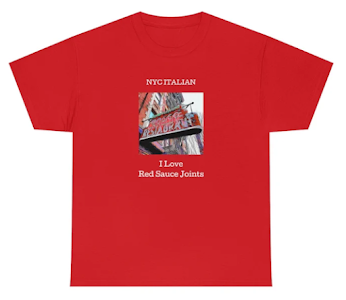 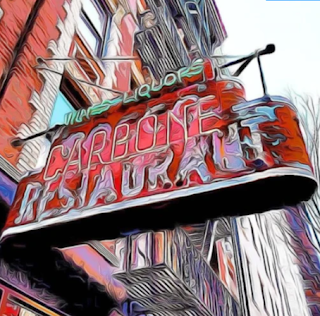 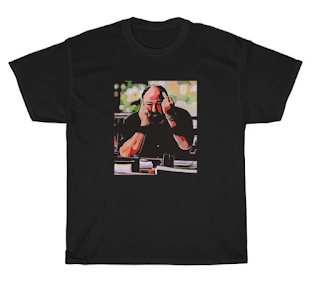